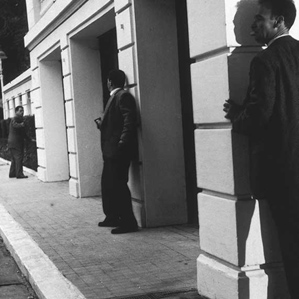 Melville’s fifth film, Bob le flambeur was his first foray into the stylized underworld which became his signature. And as is often the case, though Bob le flambeur doesn’t quite look like a New Wave film, it pointed the way for what followed it. Godard couldn’t have made Breathless (1959) without Bob le flambeur, which he quotes several times. Melville even appears in Breathless, as a director interviewed by Jean Seberg, proclaiming his desire “to become immortal and then die.”

Bob le flambeur opens with day breaking at Sacre-Coeur, then follows the tram down the steep slope of Montmartre to Pigalle, snuffing its lights and shuttering its doors in anticipation of the day: “from heaven to hell.” It’s reminiscent of Franju’s opening to Le Sang des bêtes (Blood of the Beasts), where young lovers embracing at the flea market yield to an abattoir. Both are, as Melville puts it, “love letters to a Paris that no longer exists.” They offer up the contradictions possible only in a world not yet aware of its passing.

Shot in crisp, gritty black and white by Henri Decaë, Bob le flambeur fuses the carefully perfect compositions of William Wyler with the rough immediacy of the New Wave. The result is an austerely honest artifice reminiscent of Melville’s hero, John Huston. The camera never calls attention to itself, but hand-held shots and natural lighting lend the image a fluidity and hard truth impossible to achieve in the studio.

The eponymous hero of Bob le flambeur, Bob Montagné (Roger Duchesne), is an unlucky gambler, failed bank robber and aging rake. The film’s English title, “Bob the Gambler,” unfortunately flattens the sense of flambeur, which means something closer to “high roller” or “big shot.” And it’s plain that Bob is far more concerned about appearances than reality. Nattily dressed in a light suit and trench-coat, a fedora covering his silver hair and shading his lined eyes, all night Bob haunts the back-room games and cruises the streets of Pigalle in his gigantic Cadillac. That he loses every game – and has little left to lose – seems of no particular concern, and certainly no reason to do any different. Arriving home at dawn, his closet opens onto a slot machine, one last chance before sleep.

Bob lives to be admired, or better yet venerated. Leaving his house, he salutes himself in the mirror: “good-looking crook.” His word is his bond, his trust is never betrayed, and he always helps those in a spot. Only pimps are beneath his contempt, for violating the gallantry of the gentleman crook.

His protégé Paolo (Daniel Cauchy), the loud-mouthed son of a former partner, hangs on his every word, and studies his every gesture. When a fleshy tart named Anne (Isabelle Corey) wanders into his favorite bar, he immediately charms her, albeit with such an abundance of solicitude that one suspects he no longer knows what to do with her. Nor does Paolo, who falls for her immediately, to disastrous result. Even the police respect Bob, one indebted inspector ruefully watching out for his well-being through the entire film.

Still, as his money dwindles, even Bob knows disaster is imminent. But his pride precludes any ignominious capitulation to the everyday. He swears off gambling, and gambles all on one impossible long shot. With an old accomplice and his young sidekick, Bob plans to rob the Deauville Casino during the Grand Prix, when its safe will be full to bursting.

Melville’s interest in the robbery itself is every bit as perfunctory as Bob’s. It’s no wonder Bob’s career as a bank robber was such a failure; virtually everyone seems to know what he’s up to, and it hardly bothers him at all. Godard noted that movie gangsters have to get caught, but Melville already knew why. Bob is less interested in the money itself than in making certain everyone knows who nicked it.

In any case, Bob’s luck does change, though hardly in the manner he’d expected. Not all who gamble are lucky, but only those who gamble are lucky. And if the film collapses in tragedy around him anyway, it’s all to be expected. So he just accepts it with a smile and a quip, and no regrets or second thoughts.

Only nominally a heist film, Bob le flambeur is essentially a moral parable. Melville himself called it “a comedy of manners.” (1) Bridging Renoir’s cynical humanism and the equally cynical existentialism of the New Wave, Melville offers a wry prescription for their disillusion. His crooks and fences live in a fantasy world of their own making, a world they take care not to examine too closely, lest it dissolve. And yet, this illusion provides them the meaning and purpose for which the cynics despair. True, the “code of honor, of loyalty, and of courage” by which they live is deployed to no end; they remain honorable, loyal and courageous. (2) For all his protestations of faith, Rohmer seems to doubt that Pascal’s odds merit the risk. Melville accepts the wildest chance cheerfully, asking only the opportunity to gamble and accepting failure with the same equanimity as success.