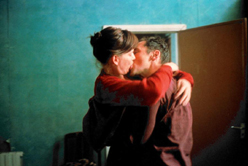 Every Wednesday afternoon, an anonymous, familiar ritual plays out in Jay’s (Mark Rylance) squalid, cluttered, and sparsely furnished apartment. The silhouette of a nameless woman (Kerry Fox) becomes visible through the front door, the lovers retreat to the basement, undress in silence, and exhaust themselves in an uninhibited and aggressive copulation. Then, after their brief and impersonal union is consummated, the enigmatic woman immediately dresses and leaves. There is little dialogue involved in this carnal transaction, no vacuous affirmation of love or even a confirmation to meet on the following week. The rules of the affair are implicitly clear and mutually understood; their separate lives may only intersect on the appointed time at the specified claustrophobic juncture.

Often compared with the controversial films Last Tango in Paris (Bernardo Bertolucci, 1972) and In the Realm of the Senses (Nagisa Oshima, 1976) for its graphic depiction of sexuality, Patrice Chereau’s Intimacy (2001) continues in a similar, notorious vein of provocative contemporary cinema, most notably in the perturbative films of Catherine Breillat, that seeks to demystify the conventional, often romanticized presentation of sexuality and capture the stark realism, awkwardness, and imperfection of the act of physical intimacy. However, unlike the themes of sexual exploration and individual empowerment that is pervasive in Breillat’s films, Intimacy finds greater commonality with the profoundly desperate and marginalized protagonists of Mike Leigh’s equally eviscerating and aptly titled film, Naked (1993), and the Bruno Dumont films, The Life of Jesus (1997) and L’Humanité (1999), where attraction and human desire become inextricably bound to the characters’ misguided search for identity, validation, and sense of purpose in an aimless and oppressive existence. Sophie’s (Katrin Cartlidge) resignation to repeated victimization in Naked, Freddy’s (David Douche) insecurity over Marie’s (Marjorie Cottreel) wavering fidelity that culminates in racial violence in The Life of Jesus, and Pharaon’s (Emmanuel Schotté) unrequited love for Domino (Séverine Caneele) that invariably affects his dogged persistence in investigating a local child murder case in L’Humanité, all reflect the protagonists’ innate feelings of impotence and consuming self-hatred. Inevitably, like the casual lovers of Intimacy, their dour silence and seemingly pointless exercises of abstraction betray a suppressed pain of isolation and inability to articulate their own overwhelming misery, sense of failure, and personal anguish.

In Intimacy, Jay is a bartender who has abandoned his music and consciously estranged himself from home and family, and is now drifting through a meaningless existence in the absence of responsibility and emotional commitment. Similarly, despite the overt support of her personable husband Andy (Timothy Spall) and son (Joe Prospero), the woman, whose name is later revealed as Claire, is equally foundering in her efforts to become a serious actress. Appearing in an adaptation of a Tennessee Williams play, The Glass Menagerie, in the back room of a nondescript pub (where the theatrical production is reduced to sharing a common placard with the restrooms), Claire plays the ironic role of the fragile and introverted Laura. Like the insulated heroine of the play, Jay, too, seemingly lives in a disconnected world of his own creation.

In a sense, Jay and Claire’s stunted and derailed careers provide a fragmentary window into an awareness of their own imperfect lives, and their anonymous rendezvous offer a temporary distraction from the unspoken realization of personal disappointment. Paradoxically, the purely physical nature of the affair and the absence of communication between the partners becomes a self-perpetuating cycle of regret, frustration, and guilt. Rather than a sexual encounter that evolves into a profound intimacy with the shared common experience of unrealized ambition, their weekly encounters appear dehumanized, unerotic, and incongruously alienating.

The evolution of the affair from casual anonymity to consuming obsession provides a shift in character perspective and serves to illuminate the core of Jay’s emotional fracture. Initially shown from Jay’s point of view, the impersonal encounters seem to provide him with a semblance of a surrogate relationship that allows him to heal from the vestigial wounds of a painful divorce. However, as the persistent and intrusive Jay continues to insinuate himself into Claire’s personal life, his actions become increasingly malicious and destructive. Does he retaliate out of frustration to possess an unattainable woman, or does he seek vengeance to ruin an enduring marriage that he does not—and cannot—have? It is through Jay’s compulsion to expose Claire’s double life and figuratively shatter the façade (as her character, Laura, also experiences in The Glass Menagerie) that he reveals his own emotional frailty. Paralyzed by indecision and unable to find real intimacy within his limited social interaction, Jay is eternally relegated to the role of uninvolved spectator, desperately and violently struggling against the crushing weight of loneliness, insecurity, and inevitable abandonment.

Adapted from the works of Hanif Kureishi, Intimacy is a raw, compelling, and intensely honest examination of the interactive nature of emotion and sexuality in human intimacy. Distilling the communication between the characters to an instinctual and primal level, the film underscores the void of communication—the absence of real intimacy—inherent in their convenient weekly arrangement. In the end, Jay attempts to suppress his pain and emotional claustrophobia in the narcotic of sex, only to encounter greater suffering and uncertainty from its ultimately unsatisfying pursuit.