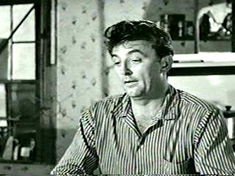 “You got problems?” asked Robert Mitchum in an article he penned for the Hollywood Reporter:

Well, climb on the pad and tell old dad. I don’t have any. Or, I didn’t have until producing a picture messed me up. As the man said, ‘it all started with a cloud in the sky no bigger than a man’s fist.’ Home crouched on the couch one night, it occurred to me that we might get a motion picture out of moonshiners and government tax men trying to outwit each other in the southeastern area of these United States. Sure, actors have problems, but I’ve found production problems come lower than a hungover snake… (1)

Like many, my screen education began by watching films on television in the days before cable, video and DVD, when Channel 9 used to screen old movies from midnight to dawn. In those days you could stay up all night and watch back-to-back Marx Brothers or Bogart. I learned to love the musical in all night sessions with Dick Powell and Ruby Keeler or Fred and Ginger. It was here also that for the first time, and maybe the second and even the third, I saw Thunder Road. It is the fate of this film to be consigned to the graveyard shift on late night television and so we have rarely had that opportunity to see it on the big screen.

Back in those days Thunder Road always felt like something of a guilty pleasure and to be honest it still does. It does not seem to be a film that was well regarded and the main interest in Thunder Road is because of the dual role played by Robert Mitchum as star and major creative force behind the production. According to biographer Lee Server, Robert Mitchum had been developing a story about moonshiners for some years. It was his meeting with screenwriter and novelist James Atlee Phillips that seems to have provided the catalyst that allowed him to go into production. Phillips’ brother worked at the CIA and was able to introduce the filmmakers to agents of the Treasury Department. This gave them access to field research on moonshining and importantly, Treasury Department co-operation. The next important decision was the choice of director.

The history of popular culture seems to be written by the survivors and can seem at times like a chain letter of misinformation. Because of that, our knowledge of the circumstances around a film’s production can be unreliable. What we can know with certainty is that Thunder Road was nominally directed by Arthur Ripley but reports suggest that Mitchum also stood in as uncredited co-director. Ripley began his working life at the age of 15 as a film editor in New York. In the time period spanning 1910 and 1958 (the year of Thunder Road), Ripley had done just about everything in the film business. Among other things he had been writer/editor for Mack Sennett, writer/editor/director for silent comedian Harry Langdon and writer/director for W.C. Fields. And from 1954 to 1958 he was Professor of Theatre Arts and Head of the Motion Picture Division at UCLA.

Ripley came to Thunder Road with a reputation as an outsider and something of a wild man but balancing this, also a fast and economical director. The production of Thunder Road did not move so quickly. By Gene Barry’s account, “Arthur Ripley was an elderly man, very intelligent, very articulate, knew camera angles, all the technical aspects. But he was very slow.” (2) Mitchum’s assistant, Reva Frederick, speaks of a different Arthur Ripley: “We found Arthur Ripley. Oh boy. He was one hundred and ninety years old or looked it. He liked to drink, and when he drank he didn’t know where he was, where he lived, or how to get back home. Robert liked him.” (3)It seems unfair to lay the blame for production delays at the feet of Arthur Ripley. Apparently Mitchum ran a very relaxed set and throughout production the script was in a constant state of flux. Phillips was “constantly writing new scenes, taking advantage of whatever local color they found.” (4) All of these factors contribute to the character of the finished film.

Internet critic Paul Brenner claims that Thunder Road lacks directorial flair and doesn’t appear directed but “assembled, in scrap metal chunks.” (5) In truth, this film bears a minimal style presenting as it does a series of tableaux that seem to owe much to silent cinema. There is not a lot of camera movement in Thunder Road. Most often the set ups are very simple with the odd tilt or pan used to adjust the framing. For example, Luke (Mitchum), Robin (James Mitchum) and their mother, Sarah (Francis Koon) are framed in a wide shot at the breakfast table. The phone rings and Sarah walks to the rear of the frame to take the call. It is bad news about one of the valleys other ‘transporters.’ Luke leaves to speak to his father about this new development. As he stands, there is a gentle tilt up to accommodate his action. When the camera does move the tendency is to hit its mark and then lock onto the still point of the players.

How strange that a film which fetishises the car and is on the surface about speed and movement is, for the most part, so still. The cars used in Thunder Road were sourced from bootleggers, and Mitchum, “was fascinated by the cars. He was very proud of what the car he was driving could do, how it could outrun the police. Mitchum was really into it, like he’d become one of these whiskey runners.” (6) Other than the car chases there is very little action. It is the tension between the calm of the tableaux and the fast cutting of these car chase scenes that give the film its dynamism.

Mitchum is the writer and producer but, more importantly, he is the star of Thunder Road. He was well known for the disregard he held toward his work as an actor. In countless interviews he disavowed the ‘craft’ of his profession. He was unsentimental about his career, regarding acting as no more than a job. It is this unsentimental, matter-of-fact quality that is the key to Robert Mitchum’s performance in Thunder Road. As the returned soldier Lucas Doolin, Mitchum somehow stands outside of the events in which he is participating. He is nostalgic for a past that he has lost and is not able to recover. Too much affected by the war, his connection with family and community has been severed beyond repair. At one point Lucas says, “I know what I want. I wanna stop the clock, turn it back to another time in this valley that I knew before.” He knows that he can’t stop that clock and he knows what his fate will inevitably be. Mitchum was a great actor, and there is a cool intelligence at work in Thunder Road, both behind and in front of the camera. It is this cool intelligence which lends structure to Thunder Road and, in the end, makes it work.