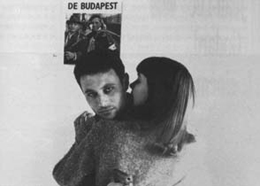 Jean-Luc Godard’s second feature, Le Petit Soldat, could very well be called his lost film. Shot during April and May 1960, just after the release of his vastly influential À bout de souffle, Godard’s film was immediately banned by the French Government due to its sensitive political content, and was not screened publicly until nearly three years later. By then, of course, the ever-prolific Godard had already gone on to make such instant classics as Une Femme est une femme (1961), Vivre sa vie (1962), Les Carabiniers (1963) and Le Mépris (1963). Notoriously, filmmakers who receive acclaim for their debut often struggle to win recognition for their follow-up, and, indeed, Godard’s second project has never been properly restored to its place in the New Wave canon. Overshadowed by its more-celebrated siblings, it still has much to offer the contemporary viewer, and yields many insights into the nascent development of Godard’s directorial style.

Nominally a thriller, Le Petit Soldat is set in Switzerland and deals overtly with the socio-political tensions of the Algerian War – albeit with an ambivalence not usually associated with the polemical Godard. Its troubled hero, Bruno Forestier (Michel Subor), is an ambiguously motivated secret agent, based in Geneva, who carries out a series of contracts for a division of the French Government, all the while under constant threat of deportation and punishment for his desertion of the army. He receives orders to assassinate an extremist leader of the leftist Arab underground, but baulks at the cold-bloodedness of the task. As both factions, French and Arab, begin to close in on him, he desperately tries to arrange passage to South America, but is unexpectedly drawn into a relationship with Veronica (Anna Karina), a mysterious woman with unknown loyalties.

One seminal aspect of Le Petit Soldat is that it marks the first collaboration between Godard and Karina, whom he would marry shortly after the film completed its principal shoot. Karina, who would rapidly become the New Wave’s most iconographic actress, is lovingly photographed throughout by Raoul Coutard, Godard’s favoured cinematographer. Echoing the lengthy hotel bedroom sequence between Jean-Paul Belmondo and Jean Seberg in À bout de souffle, Godard stages the couple’s courtship in a high-rise apartment as a series of cerebral-yet-playful dialogues, shot throughout with a freewheeling hand-held camera. Obviously lit by Coutard with far more attention than any of the other actors, Karina is posed repeatedly in close-ups, frequently grooming herself; and, in one climactic scene, she even dances flamboyantly to a blaring Mozart record. In this, Karina’s first role for Godard, we do not yet encounter the depth of female subjectivity in Vivre sa vie – but it is, nonetheless, abundantly clear that this role was designed as Karina’s star-making screen appearance.

Elsewhere, however, Le Petit Soldat is a much more pensive, even lugubrious, film than its predecessor. For after a very cursory opening travelogue introduction to Geneva, the city is soon depicted as a disorienting, even claustrophobic setting for Bruno’s mission. Unlike the fast-paced, energetic environment of Paris in À bout de souffle – which derived in part from Godard’s famous use of jump cuts – the cityscape in Le Petit Soldat is jarringly edited together via a series of whip-pans, with the restless camerawork often forcibly yanking our attention from Bruno to the watching figures of the agents in the streets around him. More intrusive still, perhaps, is the role of the soundtrack: whereas Godard’s first film featured a light-hearted, up-tempo jazz score, his second is set to Maurice Laroux’s deliberately oppressive atonal piano music.

If Godard’s treatment of Geneva foreshadows the overbearing representation of the City in Alphaville (1965), then we can look elsewhere in Le Petit Soldat for other narrative and stylistic templates that Godard would return to later in his career. A good example is a scene that takes place just after Bruno is eventually kidnapped by the underground resistance: he is tortured at length by his captors in a hotel bathroom – a sequence that would be reprised more famously five years later by Belmondo in Pierrot le fou. More systematically still, Le Petit Soldat is structured around Bruno’s reflective voice-over, in which he muses bitterly about the oppressive roles foisted upon him and his social contemporaries: his most pointed reference is to actors, who remain inherently driven by the whims of others. With a disjunctive commentary track – one that often challenges the integrity of the action on-screen – Le Petit Soldat clearly anticipates the more radical social critique of Deux ou Trois Choses que je sais d’elle (1966). Often bleakly pessimistic, yet at all times stylistically adventurous and original, Godard’s Le Petit Soldat is a film that is long overdue a serious reappraisal.