Not much has been heard or seen from Jon Jost since the mid-1990s. After a prolific stretch in which he produced a string of fresh, startling, vivid low-budget features – Bell Diamond (1987), Plain Talk and Common Sense and Rembrandt Laughing (both 1988), Sure Fire (in 35mm, 1990), All the Vermeers in New York (1991), The Bed You Sleep and In and Frame Up (both 1993) – his filmmaking activity stalled in a legal battle with producer/patron Henry Rosenthal. He moved to Europe in 1993 and made Uno a te, uno a me et uno a Raffaele (35mm, 1994-95) and by 1997 was declaring that he would cease working with film and turn instead to digital video. Since 1997, he has produced a half dozen remarkable works in digital video – London Brief (1997), Nas Correntes de Luz Ria Formosa, Muri Romani and Six Easy Pieces (all 1999), Roma: un ritratto improvvisorio (2000), and Darma Do as Darma Does (2001).

The features from the early 1990s marked Jost’s most extended flirtation with the conventional film narrative and drama, but even the most domestic of those dramas had characteristically Jostian segments wherein the camera essayed elaborate digressions in which disorienting perspectives and an impulse toward visual abstraction were indulged to spectacular and weirdly meditative effect. Such sequences were nothing new to Jost’s films – indeed they constitute a distinct facet of his authorial style in most of the earlier features as well. In the new digital works, however, this stylistic motif in his previous work takes over almost entirely. Now, in the digital pieces, the impulse to abstraction is out in full force and narrative drama is little more than a minor motif, glimpsed occasionally in the margins. And that is the special glory of the new work – these are films approaching the condition of painting and still photography, but without ever ceasing to be motion pictures.

London Brief is a late-modern variation on the “city symphony” genre which plays with color, form, light, and rhythm in a beautifully sustained montage of city scenes and moments. A wary, sardonic kind of lyricism prevails in these cinematic wanderings in an old and wealthy city, but the film’s imagistic climax comes in an extended take on a subway in which Jost’s framing creates the illusion of wordless relationships among a handful of passengers sitting separately in their seats. 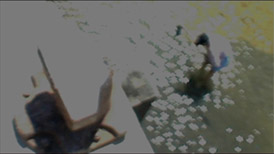 Nos Correntes de Luz Ria Formosa is a tour de force in which Jost employs a defective camera for a sublimely distracted variation on the city symphony film. The defective camera yields a range of out-of-focus images which emerge in the film as semi-abstract landscapes with blurred lines and edges. The images look more like paintings than photos, although movement, sound, a sense of off-screen space, and the sensation of stray, suspended moments in time contribute to a multi-dimensional effect that seems to transcend both painting and photography. Human figures pass through some of the images, but they play only transient and marginal roles in the overall narrative. The scenes and shots are evocative of city life, but with soft outlines that suggest settings of an entirely different sort. The implied author of these images seems caught up in a distracted gaze, one that is both averted and diverted – turning away from both the familiar and the dramatic, and finding a curious kind of peace in a sort of domesticated strangeness.

Muri Romani is like a photo album in motion. Here, Jost is collecting shots of Roman walls, improvising compositions, creating imaginary paintings with a camera, and documenting art and ‘found art’ as well. The soundtrack is predominately ambient street sounds, mostly nearby though not really close; there’s a motif of bells ringing (it’s Rome, after all), and the voices of passers-by are barely audible in the background. This minimalist soundtrack – no musical cues, just ambient sound as a gentle kind of musique concrete – creates a haunting semi-Bressonian space, and calls attention to the filmmaker/cinematographer as a detached stranger, isolato, staring at walls and other ancient remnants, now seen with contemporary sounds – history glimpsed in semi-abandoned spaces. If this is the one-time political activist staring at the wall, it is also vibrant street-wise meditation and not without a certain quasi-mystical calm of its own.

Roma un ritratto improvvisorio plays off images of flow and stillness with an array of forms in flux. It uses musical accompaniment for the black-and-white images early on, but shifts to ambient sound when color images take over. A sequence of portraits of classical busts uses ambient sounds and remains unfazed by the occasional intrusion of passers-by, and concludes with a shot of a headless bust. Tracking shots through the streets and evolving images of light and shadow in the streets take the foreground after that. Fade-outs provide a rhythmic sort of punctuation to this improvisatory portrait’s documentary statements.

Six Easy Pieces and Darma Do As Darma Does are rather like small collections of visual poems. The beachside lyricism and deep-grass prowling of the latter are especially enchanting.

Most of Jost’s new digital work is available on VHS from Facets Multimedia in Chicago. They are among the most exceptional creations of any American filmmaker working at the present.