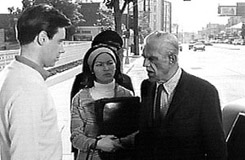 Donate the rest [of my money] anonymously to a mental health foundation. Maybe research can prevent further tragedies of this type…If there exists a God, let him understand my actions and judge me accordingly.

It seems to me a fantastically foolish picture. How intellectually chaotic to make a gun-control parable that is so empty of any sense of the people in it that the only response left to an audience is to recline with a bag of popcorn and lust after a manly score of assassinations.

The 1960s pretty much saw just another standard decade of horror and low-budget films for the ageing Boris Karloff. He starred in numerous drive-in quickies (most of them for American International Pictures [AIP]), a few TV specials, and even provided narration for kiddie matinee features, like How the Grinch Stole Christmas (1965). Boris was 81 at the time when Peter Bogdanovich offered him the specific role of Byron Orlock, an ageing horror star who is sick and tired of Hollywood’s idea of ‘horror’, in Targets, Bogdanovich’s first and, by some standards, best film as a director.

At the beginning of the film, we are seated in a screening room with Orlock watching his latest AIP clunker (actually Roger Corman’s The Terror (1963), also starring Jack Nicholson). It is afterwards that Orlock announces his retirement from film (“Since when?” exclaims the greedy, cocky producer). Orlock later points out the front-page of a newspaper to his pleading young director, Sammy (played by Peter Bogdanovich!), containing an article about a recent massacre. What Orlock is basically explaining to Sammy is that horror films are no more frightening than everyday real life horrors. The film then moves on to another narrative, featuring Bobby Thompson (Tim O’Kelly), the average all-American Joe living with his wife and parents in an outer-suburban household. Bobby shoots targets as a sport along with his father. One morning, he decides to take his target practice a step further. Whilst his father is at work, he shoots his wife, mother and a boy delivering groceries. This is followed by a random killing spree.

Meanwhile, Byron Orlock is finally convinced by Sammy and his secretary, Jenny (Nancy Hsueh), to make his last promotional appearance at a drive-in theatre that is debuting Sammy’s film. Unfortunately, Bobby turns up at the same drive-in to perform the last of his target practice.

Obviously, Bogdanovich has drawn a parallel here between the routine, fictional horrors of Orlock’s movies and the real life social horrors committed by Bobby (“The ghouls next door” as phrased by its director). Shot in twenty-three days for under $125,000, the film’s executive producer, Roger Corman, advised Bogdanavich to “shoot it like Hitchcock”. As a matter of fact the film does resemble Hitchcock’s The Birds (1963) in some ways. The suspense certainly builds up very slowly throughout the film. However, Targets runs the risk of not making sense and meaning if it is not closely examined, for example, Bobby’s violent actions are not thoroughly explained in Bogdanovich’s script. The only evidence explaining his troubled mind is when Bobby opens the trunk of his car, revealing a range of rifles and pistols, suggesting that his father’s influence to shoot targets as a sport has dominated Bobby and resulted in highly adverse consequences.

The ‘real’ Bobby Thompson though was Charles Whitman, who the character is loosely based on. The reportedly ill-tempered Whitman, who served in the marines for five years, was 25 at the time when he sat himself at a typewriter during the early hours of an August morning in 1966 and typed the following note:

I don’t quite understand what is compelling me to type this note. I have been to a psychiatrist. I have been having fears and violent impulses. I’ve had some tremendous headaches in the past.After my death I wish an autopsy to be performed on me to see if there’s any mental disorder . I intend to kill my wife after I pick her up from work. I don’t want her to have to face the embarrassment my actions will surely cause her . Life is not worth living. (1)

Whitman followed this note with the murder of his wife and mother. At 9:00 that same morning, he purchased a 12-gauge shotgun with hundreds of rounds of ammo. He took these, as well as other supplies of ammunition to a 307 ft. clock tower at the University of Texas. There, he took the tower elevator to the highest floor and began to randomly snipe at various people on the campus grounds. He was eventually confronted by two police officers who stormed in on the scene and fired eight shots into his body. Whitman had managed to kill sixteen people (plus an unborn baby), including all of those who confronted him at the top of the tower (excluding the cops that shot him dead) and a receptionist working on the top-floor of the tower. An autopsy was performed on him revealing that he had a small but deadly brain tumour in the part that controls emotional responses.

It’s always hard to examine the mind of a homicidal maniac in the movies but in this case Bogdanovich has explored Bobby’s world of violence without much depth or complexity. It is only after numerous viewings that one picks up evidence that could explain Bobby’s killings: the dull life that he leads; his cold and emotionless family; the television which is turned on for most of the time preventing communication; and his sexually repressed relationship with his wife.

Overall, Targets cannot be seen exclusively as a compelling journey into the mind of a psycho, since it works on different levels. One perspective on Bobby’s crimes comes from Orlock, who sees violence as “just senseless everyday crimes”. Another purpose of the film’s narrative focusing on cinematic horror is to suggest that Bobby’s actions are senseless which is what makes them all so disturbing, as if anyone in the world could be just as psychotic. Horror films can affect people in various ways. Bogdanovich is saying here that the horror genre is practically no different from any other genre. He’s telling those who are easily disturbed by horror films to open their eyes and see the truly horrific realities that occur throughout the world, and that horror films are just a source of entertainment.

Bogdanovich first found work with Corman in 1966 when he worked as an assistant director and extra in The Wild Angels (1966), starring Peter Fonda. That same year, Bogdanovich went under the name Derek Thomas when he was hired again by AIP to direct some scenes featuring Mamie Van Doren which were later cobbled up with footage from Planeta Burg, a Russian soviet epic. The result was released as Voyage To The Planet Of Prehistoric Women, which sat on the shelf until 1968 (same year as Targets’ release). Bogdanovich also had a bit part in Corman’s The Trip (1967), again starring Peter Fonda. He also shot Targets the same year.

Who would have guessed that Bogdanovich would have set most of the violence in the drive-in, the home of AIP movies? Fun-loving teenagers and families come to the drive-in especially to see their favourite horror-film star, Byron Orlock, and are confronted with a sniper as well as people being shot before their very eyes. Two years of working on exploitation movies for Corman led Bogdanovich to ridicule them. Having the snipering take place at a drive-in may suggest his hatred and embarrassment towards his early career. Even his character in the film, as a young director making “lousy” horror movies, also reflects this. Well, to be honest I love most of AIP’s movies but then again it is obvious Bogdanovich is re-exploiting them just as he may have been exploited by the studio, so Targets cannot be taken as any offence to the average B-movie fan. Bogdanovich’s screenplay, which apparently had some uncredited contribution from Samuel Fuller and Orson Welles, balances the two narratives in a sophisticated and entertaining fashion. (2) The B movie industry is explored using plenty of comic relief, especially from Karloff’s character: an actor who has had it with his profession but remains calmly to those who still try to exploit him. Bobby, on the other hand, counterpoints Orlock’s role in the movies and represents middle-class conservative America gone wrong. He clashes with Orlock at the end of the film to make up for a memorable finale in which Bobby, our anti-hero, cannot tell the difference between the Orlock he sees on screen and the Orlock walking towards him in real life. Targets is a clever, unconventional horror film in every sense of the word, as well as a tribute to Boris Karloff and a statement about just how lethal guns can be.

Note that this was not Boris Karloff’s last film. Just before his death in 1969 he went to Los Angeles where directors, Juan Ibáñez and Tarantino-idol Jack Hill shot footage of him which was later added to four Mexploitation shudderers, Cult Of The Dead, Alien Terror, House Of Evil and The Fear Chamber after his death. Like his competitors, Bela Lugosi and Lon Chaney Jr, two other Universal horror greats, Karloff’s acting career did not end quite happily by Hollywood standards but as the horror movie legend once said, “As long as they want me I’d like to work till the very end.” (3) I guess you can call that an antidote to his character in Targets.