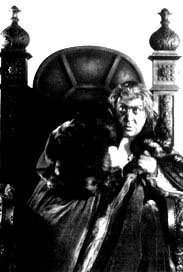 The Patriot was directed by Ernst Lubitsch and was his second last silent film. It featured Emil Jannings as Czar Paul 1, the son of Catherine the Great and the mad Peter 1. It was the first American film that Lubitsch and Jannings made together after fruitful collaboration in over half a dozen films in Germany. But, alas, it was also their final film collaboration. The film was voted one of the ten best films of 1928 yet it caused a temporary falling out between Lubitsch and von Sternberg who didn’t care for it. (1) The argument was later rekindled when Lubitsch, as the production chief at Paramount, accused Sternberg of wasteful extravagance in his crowd scenes for The Scarlet Empress (1934), not realising that Sternberg had incorporated the crowd footage from The Patriot. (2) As it was completed during the transitional period between silent and sound cinema – with The Jazz Singer, commonly regarded as the first sound feature, being released in October 6, 1927 – The Patriot was given a synchronised musical score and had sound effects added, with occasional voices at climactic moments, such as Jannings’ cry for his best friend when he realises an assassination attempt is being made upon his life. Lubitsch was not responsible for this added sound. (3) Tragically no negative or prints of the film exist with the only tantalising footage of the film existing ironically in The Scarlet Empress and in the trailer. This trailer, previously believed lost, was only recently rediscovered at The National Film and Sound Archive, Australia, now ScreenSound Australia. The print was returned to the UCLA Film and Television Archive where a 16mm print was produced and expatriated back to Screensound on the request of The Melbourne Cinémathèque for The Australian Cinémathèque screenings. The Australian Cinémathèque is proud to present the Australian premiere of this important rediscovery.